Building a brand voice is hard work. Not only do you have to define your company values and identity, but you also have to translate that brand personality into writing and design. That’s why companies who nail brand voice are impressive — they understand how to infuse who they are with every piece of content they put out into the world.

In this post, we’ll showcase seven bold companies who nail brand voice on Twitter. There’s an interesting balance between presenting a traditional, corporate voice, and exposing a more fun, wacky side that delights consumers on social media. These seven brands have certainly hit the sweet spot.

Denny’s takes a seemingly one-dimensional product — breakfast food — and transforms it into all kinds of social media gold. Their Twitter feed is filled with haikus about syrup, polls about who you’re hanging out with this weekend (friends, family, or carbs), and downright odd jokes about pancakes. And, their engagement is off the charts. The poll previously mentioned had 9,585 votes, with “carbs” winning at a whopping 74% of votes — proving that Denny’s is doing their brand voice justice.

Similar to Denny’s, food is the obvious star of Chipotle’s Twitter. But, they’ve opted for a more professional tone than Denny’s quirky (and hilarious) millennial voice by pairing professional photos with properly-punctuated copy. Fear not, there’s still a copious amount of punny burrito jokes, illustrating that Chipotle can endorse their product in a non-salesy way that appeals to a wide range of demographics.

Charmin does a great job of talking about something that people don’t typically discuss openly in a light hearted, approachable way. Their brand of bathroom philosophy ranges from friendly reminders to stock up on Charmin during #blizzard2016, to the riveting statistic that “10 minutes with Charmin each work day equals 40 hours of paid vacation a year.” They also encourage others to get in on the conversation with their hashtag, #tweetfromtheseat.

First off, let’s take a moment to appreciate Netflix’s cleverly succinct Twitter bio: “Indoorsy type. Customer service: @Netflixhelps.” Netflix’s feed is populated with visually captivating clips from their movies and shows. But, their funny captions and humor behind which clips they choose to tweet keep their feed from turning into tireless promotion. Not to mention, they’re capitalizing big on the “netflix & chill” movement (see tweet below).

Newcastle Brown Ale is pretty blunt about how awesome their beer is but somehow, their candor is surprisingly refreshing. I’d attribute this to the fact that beer, by general standards, is fun to drink. And, there’s no reason to make it more complicated than that. Finally, Newcastle interacts with their customers in a hilarious way. Check out this example of an “ad.” Newcastle created an entire series in response to people tweeting about their beer. 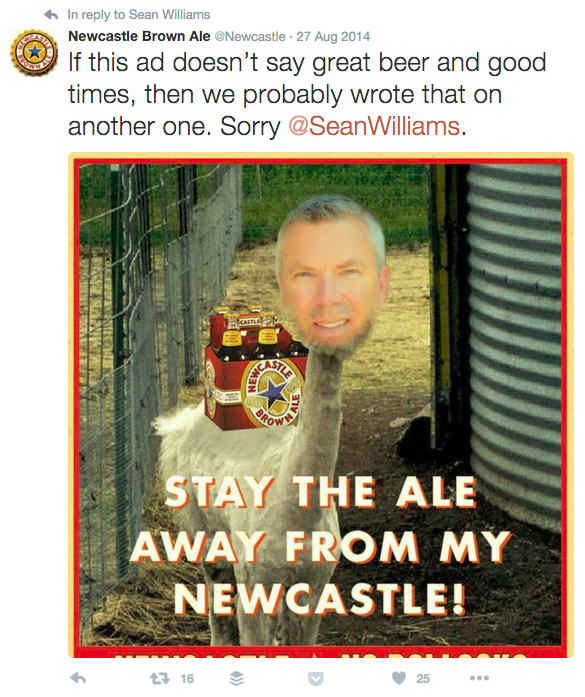 Old Spice promises “MUSCLES. SMELLS. LASERS, COUPONS. [and] GIFS.” in their Twitter bio. So, it’s appropriate that their feed is filled with CTAs to “Grab the nearest 55-lb. weight and just sort of toss it around” and images of buff men endorsing the Old Spice brand. All this talk about beef jerky and football builds a hyper-masculine, yet still silly, brand voice that effectively conveys their brand identity without taking themselves too seriously.

Snapchat is a bold and interesting brand voice because they choose to only retweet other tweets. This means that they don’t post any original content in their Twitter feed. As a result, their brand voice is a conglomerate of the voices of all their users: raving reviews of the Snapchat product, consumer delight from discovering new Snapchat filters, and announcements of new corporate Snapchat accounts (from those companies themselves, of course). This bold decision to solely retweet is only made possible by their loyal and incredibly engaged fan base — and is a testament to how powerful your brand voice can be when you speak the same language as your users. 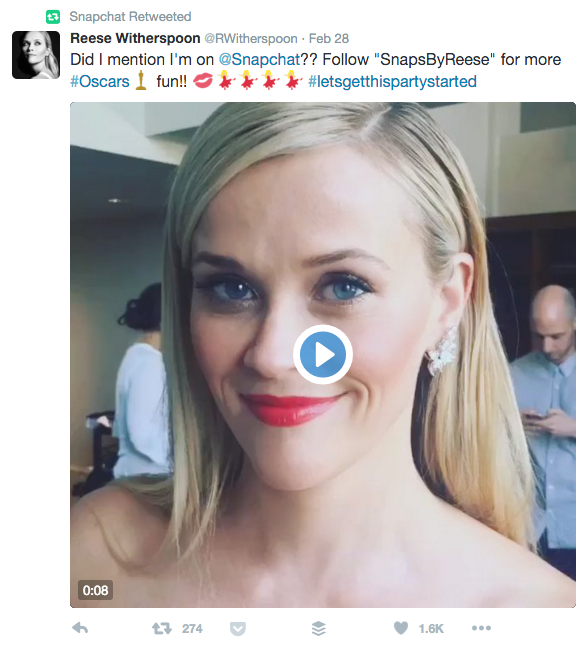 Want to build a brilliant brand voice of your own? Check out our Slideshare, “How To Build Your Brand Voice in 5 Easy Steps.“

Time for a Personal Re-Brand? Here's What You Need to Know. - Personal Branding Blog